Google Data Studio uses field names as table column titles. This is annoying, because you might not want your table to have a column titled 'Goal 12 (Goal 12 Completions)', for example. 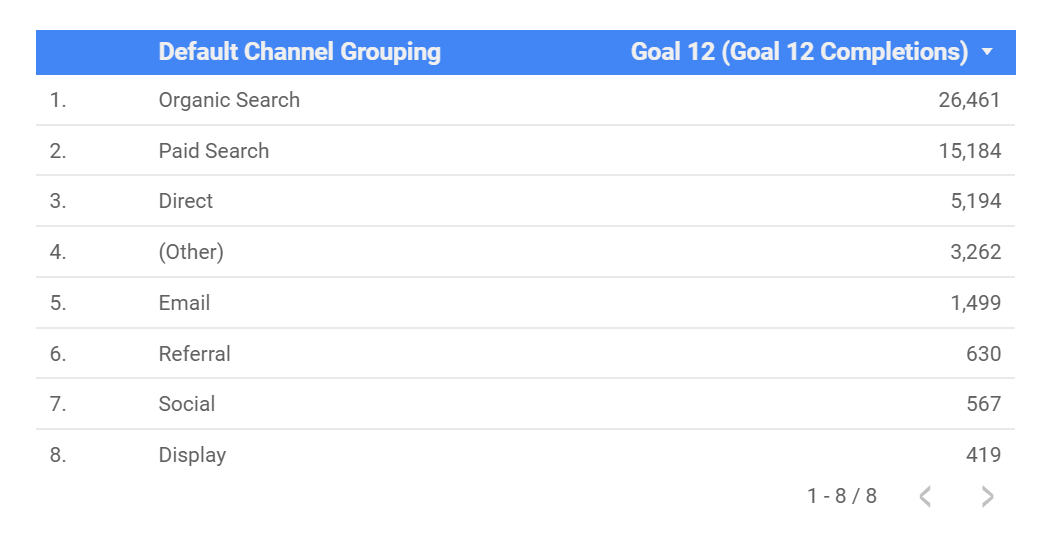 Even if you've named your Goal something sensible in Google Analytics, you will still end up with a table column in Data Studio called something like 'Enquiries (Goal 12 Completions)'. Hardly catchy!

Fortunately, Google Data Studio lets you rename fields. And not just calculated fields you have added yourself - any fields. Just:

Be cautious of this, though. I renamed my 'Goal 12 (Goal 12 Completions)' field to something pithy that would work well in a particular table: 'Conversions'. All was well. But coming back to my Data Studio report six months later, I had no idea which Goal this field referred to!

Each field has an accompanying 'Description', but for all of the goals this just says 'GOAL_XX_COMPLETIONS'. Thanks, Google...

It is possible to REFRESH FIELDS, which will overwrite any field name changes you have made in Google Data Studio. This is what I did in the end, but I would not recommend it as you will lose all field name changes.

So instead, if you do rename a field in Google Data Studio, I recommend you also edit the description to be more informative. Changing it to something like 'GOAL_12_COMPLETIONS' was all it would have taken.

I've edited the field description now - and, just to be on the safe side, I've also added a text box to the report itself stating that the 'Conversions' shown equate to 'Goal 12' in Google Analytics. Hopefully this will be useful to readers of the report, whether they are other people or just future versions of me.

A field by any other name...

While I have an approach that works, I believe there are some simple quality-of-life improvements that Google could make to Data Studio in this area. It would be useful if each field had a separate field name and display name. That way, the display name could be edited without fear of confusion as the field name would remain unchanged.

Taking this one step further, it would be useful if the display name could be set on a per-table basis. You might want a particular field to be called 'Conversions' in one table but (with a filter in place) 'Editorial conversions' in another table. Currently to do this you would need two otherwise identical fields with different names.

Anyway, I thought I would just 'field' my thoughts on this matter!