In Google Ad Manager - formerly called Doubleclick for Publishers, or DFP - it is possible to save sets of ad targeting criteria as 'presets'. These can then easily be selected for future campaigns (there's a full guide on Google Ad Manager Help). As a handy tooltip explains:

"Targeting presets work much like radio preset buttons: For every line item you want to target to these often-used criteria, load the preset to apply the saved targeting criteria."

For example, I recently worked on a campaign that involved targeting countries where people drive on the left hand side of the road. This involved selecting 50 countries, from Antigua and Barbuda through to Zimbabwe, in the line item ad targeting settings:

It's likely that this advertiser, or perhaps another automotive advertiser, might want to do the same in future. So I clicked 'SAVE AS PRESET'. This meant I wouldn't have to go through the laborious task of ticking all those countries one by one again.

Sharing with other users

However I work in a team, so how can I share my presets with team members? The good news is that the presets are associated with the Google Ad Manager network, not with the individual user, so any other users of that account can immediately see and select that preset.

(Incidentally this is somewhat different to how Google Ad Manager handles reports - or what used to be called queries. By default these can only be seen by the user who creates them. Other users must be invited as editors before they can see and use the report.)

The bad news is that my preset is not available to me on any of the other Google Ad Manager networks that I use (four in total). As with reports, presets have to be set up on each network individually.

It would be useful to be able to share presets in much the same way that Segment configurations in Google Analytics can be shared. In GA, selecting 'Share' generates a URL that can be sent to any other user to enable them to add the Segment configuration to their account:

Another limitation is that the ad targeting preset dropdown only displays 20 presets. There is no technical reason why a dropdown menu with a scrollbar should be limited in this way. Also, the 20 dropdowns listed are the first 20 alphabetically, not even the most recently created or the most frequently used. 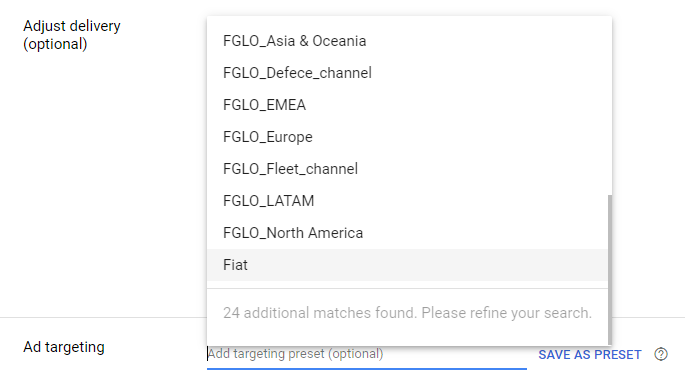 The list of 20 presets is followed by a short message saying "X additional matches found. Please refine your search". It is possible to carry out a keyword free text search for presets, but this does depend on you knowing exactly what they are called.

A busy Google Ad Manager account with multiple users can quickly end up with more than 20 presets. One top tip might be to add the name of the creator to each preset. That way everyone can easily find their own presets (or at least the first 20 of them) by typing in their name.

Another tip is that all presets are listed in Inventory > Targeting presets. So if you really are struggling to remember the name of a particular preset, there is at least a full list you can scroll through.