By default, goal-based line items in Google Ad Manager aim to deliver a certain number of impressions. But it is possible to set a goal based on viewable impressions instead (as well as clicks, but let's not worry about that today): 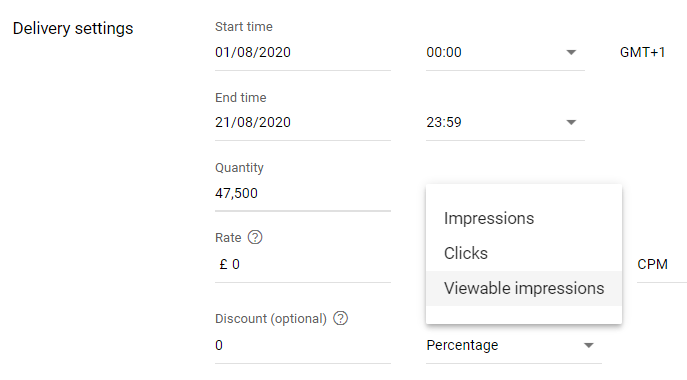 What are viewable impressions, and what as a publisher do you have to consider when setting a goal based on them?

Google Ad Manager (and indeed other Google properties such as Google Display Network and YouTube) adhere to the standard industry definition of viewability. As Google explains:

In an effort to foster greater standardization around what is considered a viewable impression, the Interactive Advertising Bureau (IAB) and the MRC [Media Rating Council] collaborated with hundreds of major agencies, advertisers, publishers, and technology providers (including Google) to develop a collective industry standard.

At Google, we support the IAB and MRC definition of viewability: a minimum of 50% of the ad is in view for a minimum of one second for display ads or two seconds for video ads.

The second part of that definition, "in view", means "visible in the browser window". In other words, an ad impression served lower down on the page, outside the viewport, wouldn't be considered viewable until the user scrolled down far enough to see it. I guess the terminology is 'viewable' rather than 'viewed' because even if an ad is in the viewport, you can't force someone to look at it - or prove that they have done so!

Anywa, Google has a very handy 'viewability in action' demo which demonstrates how viewability works in real time: https://www.thinkwithgoogle.com/feature/viewability/demo

Taking this further, it is understandable why savvy advertisers would want their campaign to have a goal based on viewable impressions rather than just impressions. After all, what's the point of paying for ad impressions that nobody sees?

What viewability means for publishers

Whether this is to avoid confusion or for some technical reason I do not know. If you need to find out the number of viewable impressions for such a line item, then you will need to generate a report.

Speaking of reports, it is possible to creating a simple report in Google Ad Manager that gives you a feel for your site's viewability:

The report you have just generated will list all of your ad units and, for each one, the percentage of measurable impressions served to them that were viewable. The higher the percentage, the better. Here's a very simple example with just the one ad unit: 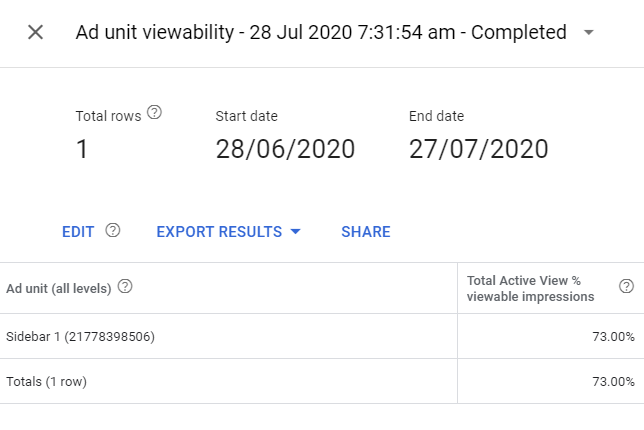 It also raises the question, what on earth is Active View? Here's Google's definition:

Active View is Google's viewable impression measurement technology. It's our solution for measuring and buying viewable impressions across the web and is accredited by the Media Ratings Council. It measures in real-time, on an impression-by-impression basis, whether or not an ad was viewable to a user. It's effortless, free and integrated into all of our advertising platforms and Active View metrics are fully transparent, based on the direct measurement of each impression, not sampling or extrapolating.

Going back to your viewability report - you can use this to get a feel for how a viewable impressions goal might impact either the number of impressions that need to be delivered, or the CPM of a campaign, or both.

For example, if an advertiser offers you £1,000 for delivering 100,000 impressions, that equates to a CPM (cost per thousand impressions) of £10:

But if the advertiser wants 100,000 viewable impressions and you have a viewability of 50%, you would need to deliver 200,000 impressions (100,000 % 0.5) in total to hit that goal. That reduces the CPM to just £5. Incidentally that figure of £5 is your 'viewable CPM' or vCPM. And suddenly you have a financial incentive to improve your website's ad viewability!

And I just wanted to finish by mentioning another couple of 'gotchas' that might catch you out with viewable impression goals: