LinkedIn Audience Network: Why your LinkedIn adverts are appearing on third party sites

If you run a 'Sponsored Content' advertising campaign on LinkedIn, you might assume that your adverts will appear on LinkedIn itself. But it could be that most of your impressions get served on third party sites instead. We look at why that happens and how to see the impact on your campaign.

LinkedIn Sponsored Content is a paid advertising option that enables your advert to appear "directly in the LinkedIn feed of professions you want to reach". Less well known, however, is that your Sponsored Content advert may appear on a whole range of third party (external) sites too. How does this happen?

When setting up an image or video Sponsored Content campaign in LinkedIn's Campaign Manager tool, you'll have the option to "Enable the LinkedIn Audience Network". And it will be ticked by default - so you might not even know you have it selected (which is a bit cheeky):

Displaying ads on the LinkedIn Audience Network gives you up to 25% more reach with your target audience.

So you are reaching the same audience, just on third party (external) sites that they visit rather than on LinkedIn itself - no bad thing.

The impact of Audience Network

LinkedIn says that Audience Network "gives you up to 25% more reach". You could take this to mean that only up to 25% (or an extra 25%, so 20% of the total) of your impressions would be served on Audience Network sites, with most of them appearing within the LinkedIn feed. That's not the case, or at least not necessarily.

Recently I was involved with a campaign that had LinkedIn Audience Network enabled. To my surprise, 99.6% of the impressions and 100% of the clicks occurred on third party sites rather than LinkedIn itself. Yes, this is anecdotal - but it does show that in the right (or wrong) circumstances, your ads may hardly show on LinkedIn at all.

I can think of two reasons why a campaign might skew towards third party sites. 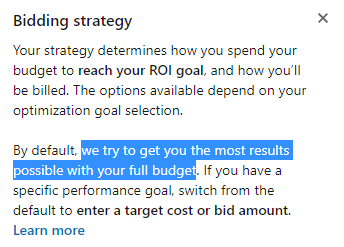 You may now be wondering about the impact of Audience Network on your own campaign. The good news is that LinkedIn provides advertisers with two ways to see how much of their campaign has been delivered through Audience Network, and to compare their Audience Network results with their LinkedIn feed results: using the 'breakdown' option or exporting a CSV report.

Let's look at each of these in turn:

The quickest way to see your reliance on Audience Network is to use the 'Breakdown' option. You'll find this dropdown in Campaign Manager, when looking at overall account results or individual campaign group results. Change it to 'On/Off Network': 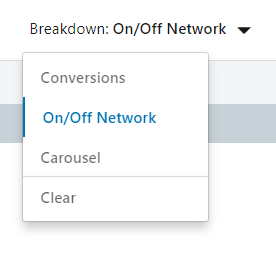 And LinkedIn will add two additional rows to your results table, 'On Linkedin' and 'Audience Network'. This lets you see all the metrics (spend, cost per result, impressions, clicks, average CPM and average CPC) not just overall but for each of these two platforms individually.

The other way is to export the data as CSV. Again you do this in Campaign Manager, when looking at overall account results or individual campaign group results. 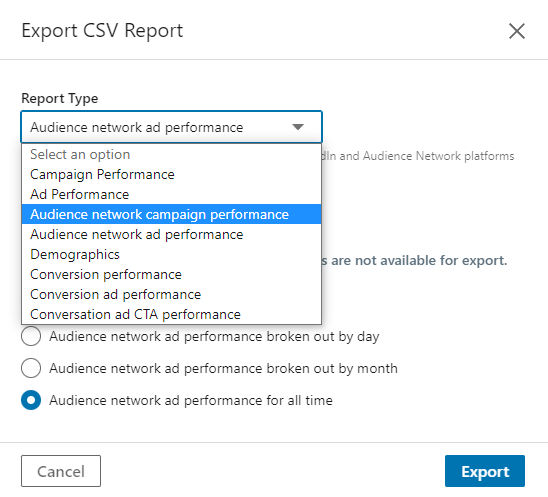 Once you have selected your time breakdown and clicked the blue 'Export' button, LinkedIn will immediately generate your CSV. Open it up and look for the column headed 'Platform': this will indicate whether a given row relates to Audience Network, LinkedIn or Overall.

Looking at your results, it may be that your campaign has been delivered both on LinkedIn itself and through Audience Network. This will enable you to make a direct comparison between the two.

However, if your campaign is almost totally skewed towards Audience Network (as in my real-life example earlier), this won't be possible. Your next step here could be to run two otherwise identical campaigns, one with Audience Network enabled and one with it disabled. Actually, you could copy the existing campaign and simply change the Audience Network setting (click on the 'three dots' icon and select 'Duplicate': 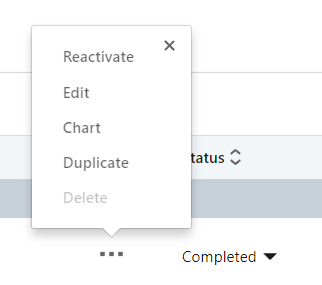 So now you know why your LinkedIn ads are appearing on third party sites and how well they are performing there. But which sites are they appearing on? I'll look at that in my next article about LinkedIn advertising...