LinkedIn Groups to receive another overhaul in attempt to boost engagement

I set up my first LinkedIn Group back in 2010, for an employer. In the early days it was easy to grow groups - there was even a CSV upload function enabling you to mass invite users. I remember we added 177 members the day we discovered that!

For the past few years though, growing groups has been something of a slog. Following an overhaul in 2015, groups no longer felt integrated into the main LinkedIn experience and became something of a wasteland. Even groups with thousands of members had very little discussion. You knew things were bad when even the spam started drying up.

But I persevered with Groups, because I had heard rumours that more positive changes were coming. Now those rumours have been confirmed courtesy of an email from 'Chloe' at LinkedIn. Here's how it starts: 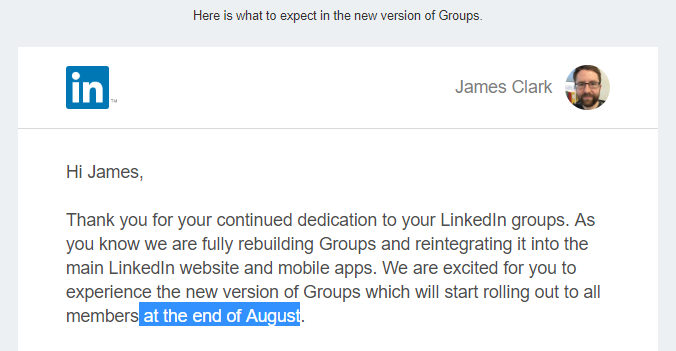 Yes, that's right - LinkedIn is fully rebuilding Groups and the version is being rolled out at the end of this month!

LinkedIn goes on to say its focus with the new Groups is on features that help with "boosting engagement and enabling vibrant discussions". These are to include:

Ironically this comes at a time where I'm finally getting good traction with Company and Showcase pages for a number of brands. But Groups, by the nature of user-generated content, have the potential to be so more - so I would like to see them succeed.