This is what happens when you request an archive of your data from Twitter.

Twitter provides the option to 'download an archive of your data', giving you a ZIP file of (in Twitter's words) "the data we think is most important to you". The Twitter Help Centre does warn "It may take a few days for us to prepare the download of your Twitter archive." However many articles published elsewhere on the web say the timeframe is much quicker than that, giving times that range from a minute to a couple of hours.

I went through the download process myself recently - so how long did it take for me, and what did the data export contain when it was ready?

In my case, I requested a data download for two accounts: an old but little used one, and a newer one with more data. In each case I received an email notification almost exactly 24 hours later that the data was ready: 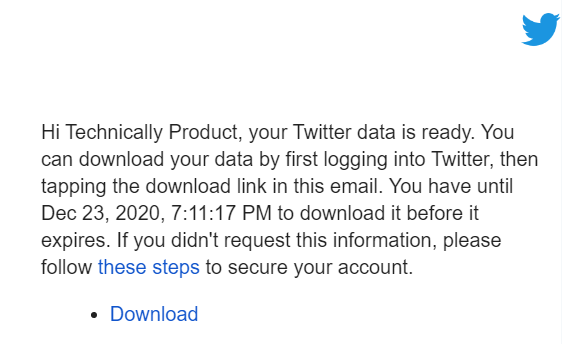 Given that the accounts were of different sizes but took exactly the same time, it doesn't feel as if the size of the account is the main factor in determining how long you have to wait.

I made my two requests on consecutive days, so the time taken may indicate a fairly consistent queue or backlog at Twitter's end. However 24 hours seems very neat, so I suspect this is instead a deliberate delay introduced by Twitter. Why? To stop hackers immediately downloading account data following a successful hack.

Indeed, Twitter suffered a high-profile hack only this summer, after which the download option was completely unavailable for six weeks:

I am assuming the 24-hour delay was added then, explaining why articles written before this summer's attack give a much shorter timeframe.

Yes, it is strange that the smaller account compressed more effectively, but I suspect this is because the content mix was different: for example, it contained more 'media' data (photos I had tweeted) and less 'ad impressions' data ("the ads you may have seen on Twitter").

Both folders however did include the same README file, outlining the rest of the contents:

So while my accounts were 33MB and 41MB respectively, the README does imply the existence of archive files that are more than 50GB! That would be quite some Twitter account - more than 1,200 times bigger than my larger example. It would be interesting to know whether the data for an account like this would still be made available in 24 hours...